America’s First Avenger will battle his foes on the streets of Manchester and Liverpool during filming on the big-budget superhero film.

Manchester’s Northern Quarter is to be transformed into 1940s New York for a dramatic car chase in Captain America: The First Avenger.

It has been chosen by Hollywood studio Marvel Productions for the company’s first film shoot outside the US.

US actor Chris Evans, who was also in Fantastic Four, plays the title role.

Producers chose the Northern Quarter to recreate New York because of its towering buildings and pre-war architecture.

We suggested the area to Marvel as its wide streets, towering buildings and pre-war architecture will make the perfect 1940s New York”

The location was organised through the Vision+Media film office, based at Mediacity in Salford Quays, which brought the big budget production of Sherlock Holmes to Manchester and Liverpool.

Susan Williams, drama liaison manager, said the company was approached by the studio, which is also behind the successful Spider Man and Hulk films, in February.

"Manchester’s Northern Quarter is one of our most popular filming locations in city, thanks to its versatility," she said.

"The area was a convincing Victorian London in Sherlock Holmes last year and more recently it became 1980s Soho for the BBC’s Worried About The Boy drama.

"We suggested the area to Marvel as its wide streets, towering buildings and pre-war architecture will make the perfect 1940s New York."

Residents, local businesses and Manchester City Council have all been consulted about the production, which will last about two weeks from mid September. 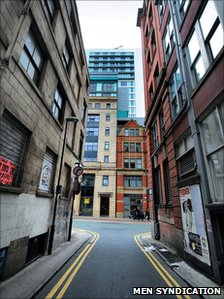 "We believe that projects such as this provide significant financial benefits for the region, providing opportunities for hotels, catering outlets and the regions talented production crew," Ms Williams added.

Previous filming in Greater Manchester has brought in an estimated £23m to the local economy, she added.

Details of scenes due to be filmed at Liverpool’s Stanley Dock are yet to be finalised.

The big-budget film will tell the origin of Captain America, one of Marvel’s most iconic superhero comic book characters.

The story follows a young soldier called Steve Rogers, who volunteers to undergo a series of experiments and is transformed into a human weapon, known as Captain America.

According to the official synopsis, the super hero "earns his way into the hearts and souls of every American, bringing hope and justice to a war-weary nation".

Other stars billed to appear in the film include Samuel L Jackson, who plays Nick Fury, head of the shadowy Shield organisation and Lord of the Rings star Hugo Weaving, who plays a villain called The Red Skull.