04 Jul 2010 /
By admin /
Leave a Comment /
Tags: Interviews and other Articles
Fangoria
Lee Gambin
February 17, 2010
Universal’s eagerly anticipated update of THE WOLFMAN was unleashed in cinemas everywhere this past Friday, and one of its stars, the MATRIX films’ Hugo Weaving, gave Fango some of his time to talk up the lycanthropic epic. We spoke to him while he was in the midst of the Melbourne (Australia) Theatre Company’s production of the acclaimed play GOD OF CARNAGE.

FANGORIA: Are you a fan of the horror genre?

HUGO WEAVING: I like things that are well-written. If the script is good, then I’ll enjoy it. If the script is bad or loose or silly, then I can’t get into it. However, I believe genre pictures such as horror films should be allowed to have a sense of freedom in the writing. But sadly, those pictures tend to be looked down upon or overlooked as serious pieces of art. The Western, the musical, action films, horror films, fantasy films—I mean, they are the founding and starting point of great American cinema, yet even though they’re commercially successful and often critically well-received, they are never given the proper respect they deserve just because they entertain. There’s a weird resentment toward escapism in intellectual circles, which happens not only in film, but in theater too. 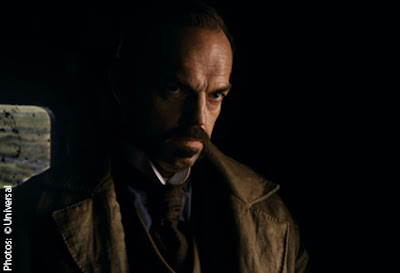 FANG: What can you tell us about your character in THE WOLFMAN, Scotland Yard’s Inspector Aberline?
WEAVING: Well, he’s a no-nonsense detective who comes into the lives of the Talbots by investigating the strange murders that are somehow happening around the family. He was not in the original film from the ’40s, although after watching that film with Lon Chaney, I kind of liken him to the Claude Rains character. I even tried to do a Rains-style voice in preshoot rehearsals, but it didn’t work [laughs].
FANG: On that note, how did the original WOLF MAN troupe—Lon Chaney Jr., Rains, Evelyn Ankers, Maria Ouspenskaya and Ralph Bellamy—feed the performances of your fellow cast members?
WEAVING: Everyone seemed to bring their own interpretation of their character to this film. It’s a far grittier movie than the 1941 film, as you could imagine. The original is loaded with that glamour of the Universal horror pictures of the golden age. In this film, everything is on show, and that includes the blood, sweat, and tears, and that most definitely alters the mood and style and totally feeds the performances of the actors. Geraldine Chaplin, who is the legendary Charlie Chaplin’s daughter, was a hoot to work with and brought so much of herself to the role created by that great character actress Maria Ouspenskaya. But listening to her, it’s as if she had channeled Maria. There was something truly haunting about her performance. But I believe Benicio Del Toro [playing Lawrence Talbot] did the most studying of Lon Chaney Jr. There are points in the film where he looks remarkably like him. 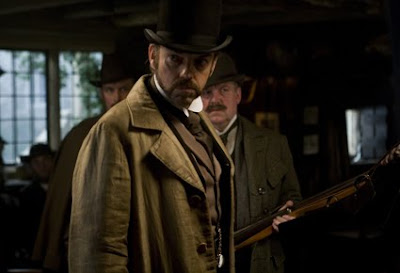 FANG: He also kind of resembles Oliver Reed in the Hammer classic CURSE OF THE WEREWOLF. Do you have a favorite werewolf movie?
WEAVING: I remember seeing AN AMERICAN WEREWOLF IN LONDON when it first came out, and that was really good. A great combination of horror and comedy.
FANG: What was it like working with legendary makeup artist Rick Baker? Were you in the chair for any prosthetic work?
WEAVING: Rick Baker was charming, and a soft-spoken gentleman who excelled at his craft. It is dumbfounding what that man could do with materials that have been with the industry forever. His work on the werewolf sequences was astounding. And yes, I did get to have some work done, but I won’t tell you too much. Let’s just say that this film has a healthy amount of blood and guts, so the makeups go beyond fur and fangs. 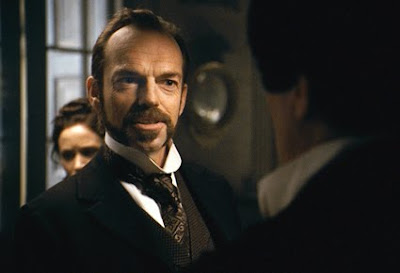 FANG: How much would you say Lon Chaney’s Wolf Man design was a reference point for Baker?
WEAVING: He had images galore of those old Universal werewolves, the one with the bad case of sideburns too…who was he again?
FANG: Henry Hull from THE WEREWOLF OF LONDON?
WEAVING: Yeah. Rick wanted to put his own mark on the design but still pay homage to the Lon Chaney Wolf Man. He came out looking amazing, truly amazing. Rick Baker is possibly one of the most modest yet talented people I’ve met. He is his craft. It’s phenomenal. He is definitely the master of werewolf makeup artistry, and it was cool to work with the man who originally did the FX for AN AMERICAN WEREWOLF IN LONDON. We shared a few stories and I was kind of like a teenager again, asking him how he did what he did on that film.
FANG: Was THE WOLFMAN a fun experience overall, and will you return to the horror genre in the future?

WEAVING: It was a good experience; I just wish the studios and distributors and press and everything that has nothing whatsoever to do with us actors had gotten their shit together and brought this movie to the eager public sooner rather than later. Films lose momentum, and this one has been whetting the appetites of moviegoers, especially horror fans, for too long now. I also want to make note that the fans of horror are possibly the most hardcore and fanatical and lovely. Ever since doing this film, I’ve had more conversations than ever. So yep, for sure, I would love to do more horror films, just as long as they’re the right projects.