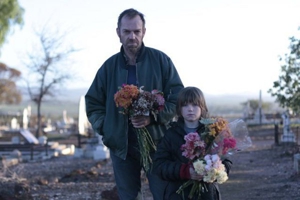 It is almost impossible to determine the true nature of Hugo Weaving’s character (Kev) in the father-son Australian drama, Last Ride. Perhaps in the film’s final, tragic moments the man behind all of the violence and crime is fully unveiled; nonetheless, the viewer is still left with many of the unsettling feelings experienced throughout the majority of Glendyn Ivin’s feature directorial debut. This curiosity about the main character—and his major crime (which is revealed gradually)—creates and maintains the lovely, looming suspense of Last Ride.

Kev seems a criminal of circumstance. He commits petty crimes to get himself and his son from point A to point B, although it is unclear for some time why he is on the run. Still, the viewer can assume it is for an act more serious than car theft. His ten-year-old son, Chook (played by newcomer Tom Russell), is along for the ride, but also plays a crucial role in the film’s plot, consistently asking the difficult questions about his father’s troubled past. As the gritty pair make their way across the South Australian outback, Weaving plays the unflinchingly brutal fugitive as well as he plays the loving and doting father—so well, that the two often appear to be a perfectly “normal” father and son on a boys-only road trip. They light up sparklers on a rooftop (after stealing a car) and take silly photos of one another on Kev’s phone (once they’ve stolen all the food they can from neighboring campers).

Chook’s flashbacks create the real tension of Last Ride, as images from the past slowly and deliberately expose the true nature of their flight. This truth involves a disturbing sexual act against Chook, which Kev responds to passionately, violently. However, even this aspect of the story is never completely revealed. Last Ride accomplishes the difficult task of being a complete film with a fully explored storyline that is simultaneously enveloped in mystery. Eerie and strange, and unwilling to produce concrete answers to every question, it leaves the viewer with an unabating interest in the characters and the traditional (yet unconventional) father/son dynamic at work.

With an outstanding performance from Weaving and impressive work from his young co-star, Last Ride participates in a grand narrative of films concerned with the unique relationship between a man and his boy. As Chook takes on (and tries to rectify) the sins of his father, we are reminded of similarly complex relationships in last year’s The Tree Of Life, this year’s Boy, and the countless other films where a seemingly bad father tries to raise a good son—and, in doing so, redeems himself. Although it is not the perfect movie—visually, it is not especially stunning and there are few laughs in this heavy-hearted tale—Ivin’s first film tells an outlaw, Outback story with universal themes that can hit close to any home.