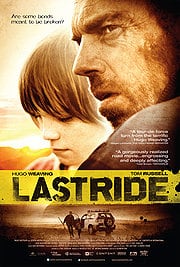 Last Ride is not a heartwarming story. More than one person dies in the course of the film, but it’s not really a murder story. It’s immersed in Australian culture and identity, but it’s not really a movie about Australia, either. The central characters are on the wrong side of the law, but it can’t even really be considered a crime film. It’s easy to say what kind of movie that a film isn’t, but pinning down what makes Last Ride remarkable is a much more difficult feat. At its simplest, Last Ride is a movie about desperation: how bad decisions lead to further bad decisions and how there comes a time when there’s no more decisions to make.

Adapted from Denise Young’s novel of the same name, Last Ride is the first full length film from director Glendyn Ivin, though you’d never know it. While the downfall of far too many first time directors is a lamentable tendency to throw in every cinematic trick in the book to demonstrate the breadth of their skill, Last Ride is a stark, simple movie. It begins with an eerie, silent shot of a field of parked, empty cars, and then focuses in on a small boy moving quietly between them. There’s a pellet gun in his hands, and he targets a rabbit. He misses and the rabbit scurries off behind a car. It’s a wordless, ambiguous scene and telling of how the film is going to go from here. The boy, Chook (Tom Russell), and his father Kev (Hugo Weaving) spend the movie on a journey to…nowhere exactly, but more a journey from. Though the film leaves exactly what caused them to be fleeing the police vague till near the end, it’s clear that something violent has happened. Kev is a former convict and all around shifty type, covered in prison tattoos and grimy hair; over the course of Last Ride, he frequently loses his temper and lashes out at whatever’s around him, including Chook.

But he’s also a loving father, which makes it hard to pin him down as a bad guy. He has a certain stubbly charm, and clearly has an effect on women. He’s rough with Chook, but also affectionate and warm. He’s a far more realistic portrayal of parenthood than cinema usually produces, a person who doesn’t have all the answers or unlimited patience but knows that he has to muddle through raising a child anyway. Of course, running from the police in a series of stolen cars makes it extra difficult.

Last Ride follows Chook and Kev as they scramble from one place to another, trying to find a safe place to lay low. It’s clear from the start that Kev doesn’t have a plan or set destination. He’s doomed to be caught; it’s just a matter of time. As Chook slowly figures this out, he finds he needs to decide how he’s going to survive: with his father or without. Most of the film plays this out silently, with Chook sneaking off to try to get reception in the outback with a stolen cell phone, or trying to get an old acquaintance of his father to let him stay with her. None of it works out and the pair end up in a series of gorgeous scenes in the wilderness, camped out by a desolate lake and driving over shallows that mirror the sky. The movie’s standout shot is simply Chook standing in what appears to be the middle of the sky as his father’s car dwindles in the distance. It’s a remarkable trick of photography and nature, perfectly captured by the filmmakers.

And while Russell portrays the childish petulance and anger of Chook well, it’s Weaving that’s the heart of the film. He captures Kev perfectly, a man who’s well aware of the mistakes he’s made but doesn’t know what to do with the life he’s made. He hits the notes of fatherhood just right (as in a scene where he dunks Chook in a pond to try to teach him to swim, something all fathers are apparently obligated to do), as well as the lack of self control that periodically erupts in rage. Last Ride is remarkable film for several reasons, but it’s most worth watching for Weaving.