Walking into this production is like nothing else. The audience (much smaller than usual, only 360 people can fit) sits on the stage, on temporary seating, which is either fine or not comfortable enough, depending on who you ask. In the maw of Sydney Theatre, four rows of seats have been removed, and lighting has been re-rigged, but everything else is untouched: the audience seats stretch up into darkness, neat rows of untouched, un-sat-upon chairs.

Before us: a long table, de-costumed actors in neutral tones. They seem small and unassuming, no mean feat when these are all of them powerhouse performers.  Kate Box, Ivan Donato, and Robert Menzies dip their hands, their face, into water, and suddenly they are the Weird Sisters (“When shall we three meet again?”) and we are off and running. 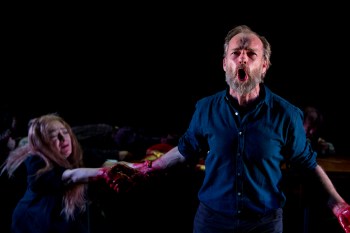 In the hands of Alice Babidge the reversal of Sydney Theatre, with 900ish empty seats backgrounding the drama, is extremely successful. The empty space is overwhelming and increases the tension along that table: unsettled, we focus on the performers, so small and human against an imposing backdrop. When smoke consumes the makeshift stage and obscures everything from vision, we feel panic – everything has changed, Duncan is murdered and now there is nowhere to go but down.

Light and focus return through a haze of orange, pushed out and away into nothing by a series of fans. When the cast does venture into the wasteland of seats – a horribly thrilling chase, Banquo (Paula Arundell) and Fleance (Eden Falk) running for their lives, Macbeth’s men determined to end them, and then up into the dress circle to demonstrate Macduff’s (Kate Box) thorough fleeing of Scotland – it’s effective, resonant, and reminds us that all this space doesn’t give anyone even an inch of distance from their imminent destruction. Lighting by Nick Schlieper drags us deeper into the play.

Director Kip Williams has brought this turned-around Macbeth to the Sydney Theatre Company after an intensely moody-energetic-youthful Romeo and Juliet last year. With this new venture he proves the gift we suspected last year: he has an eye for the moments in Shakespeare’s poetry that matter. He re-shaped Capulet and Juliet’s relationship with nothing but directorial emphasis, and here, with the would-be King and his wife, the great partners of Shakespearean horror-romance, he hones in with precision and lets us look at them anew.

That’s the benefit of a show that we all have passing familiarity with; we’re ready to be, not disoriented, as the backwards staging might suggest, but re-oriented: going back to the heart of the matter.

Lady Macbeth (Melita Jurisic) is not, necessarily, ambitious. Here she seems to grab onto Macbeth’s (Hugo Weaving) ascension with no hands because she has nothing else. Her voice breaks on that telling, sole piece of backstory – “I have given suck” – and she clutches at Macbeth, begging him, it seems, to understand the gravity of what she is saying: I would destroy my precious lost memory for you to have this thing, so we have anything at all in our lives. Lady Macbeth is never really all there – she is from the first moment we meet her suppressing a keening, a desperation that only her husband can abate.

And Macbeth, in the hands of Hugo Weaving, who is magnificent in a way that’s a reorientation in itself (his work in last year’s Waiting for Godot was good, but this is extraordinary) is ambitious, yes, but he is also a husband and has a responsibility to the happiness of his wife; one gets the sense that he agrees so readily to Duncan’s murder because his Lady talks like it has to be done like her life depends on it. It’s not her fault – it’s his choice, or their choice together – but it is so dependent upon his connection with her that there’s no room for him to process the consequences. Banquo (Arundell, is inspired casting) is the other side of the coin to Macbeth, his mirror image. He takes the prophecy – his sons will be kings – with a grain of salt; he is calm while Macbeth is fair vibrating with emotion and reaction. As a ghost, betrayed, he is contained: sorrowful, grave, relentless.

Banquo’s ghost gives us the best gift and the too-fast beating heart of this production and that is terror.

Macbeth is full of it, shaking with it, crying with it helplessly, in a bravura performance by Weaving, who is incapacitated by his ghosts, so much so he is almost childlike in his sobs. It’s incredibly powerful and uncomfortable and impossible to look away from. Who knew this play could still leave such an impact?

Weaving speaks in iambs like he’s born to it, and Jurisic soars with him, a lovely demonstration of their love through language and its delivery. Arundell speaks it with a refreshing plainness, finding economy in the poetry, which further demonstrates her opposition in life and outlook to Macbeth (it’s so well done).

Box is a sincere Macduff whose emotional climax: the death of his entire family (“All my pretty ones?”) comes with unquestioned passion and despair: Macduff is never removed from the tragedy of the play, even up there in the dress. Even when he wants to be.

And isn’t it so nice to see characters who are really in the play? No one is dismissive: their lives depend on what happens to Macbeth, to themselves, to their families, and that sense of urgency is never, ever hidden behind a surface. 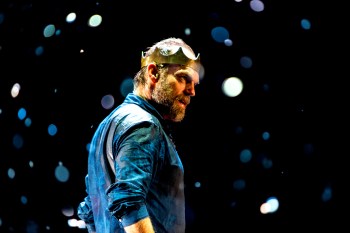 By the time we come to the end, when Birnan Wood is coming to Dunsinane and Lady Macbeth has collapsed in upon herself, babbling in deep pain, Weaving’s Macbeth is beaten, weathered, destroyed. He stands to fight Macduff, but can barely lift his sword. Rain of cascading pale glitter falls, and falls, and falls. It is as inevitable as that prophecy, the weather, and Macbeth must bear it, and he must meet his end.

For several minutes, with that rain, with Weaving and Box and a sword, alone, it’s like not one person in the audience takes a breath.

This is spellbinding theatre and Weaving carries heaving fear on his shoulders at is centrepiece, but the entire company is excellent, particularly Box, Arundell and Jurisic, but all fill their multiple roles with solemnity and conviction, dive into witchiness without hesitation, give everything they have for almost two hours, without interval, with hardly any exits from stage.

King Lear’s Cordelia couldn’t heave her heart into her mouth to save her life; these figures in Macbeth, the man and the Lady, the knights, the people who are just people who can’t stop something once its begun, even knowing the ending just gets worse and worse, couldn’t get their hearts out of their mouths if their lives depended on it.