As I attempted to write something down about Jonathan Ogilvie’s stylish-but-empty noir romance The Tender Hook I racked my brain for hours. Yet nothing seemed to be jumping out at me. It’s not that I thought it was an especially bad movie, although it really must be said that it isn’t any good, it’s just that… well… I was so nonplussed by the whole endeavour. Upon leaving the cinema on that Sunday afternoon I felt no different to how I felt when I entered. I hadn’t had any grant realisation at any point, I hadn’t had any strong reaction be it positive or negative. I just was. It’s a strange feeling to be sure.

As it is, the film revolves around the character of Iris (Rose Byrne) who becomes trapped in a love triangle between the (I think) mob boss McHeath (Hugo Weaving) and his new boxing recruit Art (Matt Le Nevez). Cue sneaking around, shadowing double-crosses and a storyline about illegal beer that not only goes nowhere, but appears out of thin air to disrupt any chance of the viewing becoming engaged by the other plot lines that float around on the fringe. The possibly interesting story of an Aboriginal boxer (Luke Carroll) could have been something (with wafts of September, natch) but it just flounders about before Ogilvie just dumps it for something shiny. 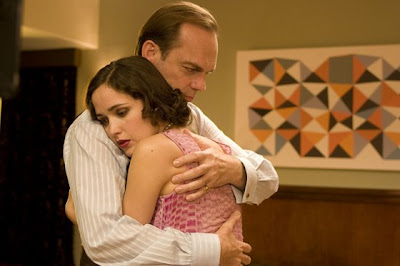 I want to commend writer/director Ogilvie (they’re always writer/directors aren’t they?) for at least attempting a go at a genre that this country so rarely churns out, but in doing so on what I presume was a limited budget, he has stifled any chance of it being truly memorable. Period-accurate production design is virtually non-existent save for a few old automobiles while dialogue is distinctly modern at times and Weaving’s character inexplicably sings songs written by Bob Dylan and Leonard Cohen despite there being no precedence for the film pulling a Moulin Rouge! on the audience. It’s all a bit of a mish-mash.

Thankfully the gorgeous Byrne is quite nice in the role and she definitely fits the flapper garb that she gets given with those big splashes of lipstick. Pia Miranda has a few brief moments of loveliness early on, but her character ultimately goes nowhere and is superfluous. In fact Byrne and Miranda share the film’s best moment, an impromptu dance sequence on a pier that is light and wonderful. The opening/closing sequences are also really well done, but the rest is just so unexciting. Jeffrey Simpson’s cinematography is quite well done, and the costumes by Cappi Ireland are nice to look at. It’s just that things happen and nobody particularly cares. The characters themselves even appear passive and the boxing sequences are unexciting due to a distinct lack of atmosphere. Did they not have enough money to pay for extras? These scenes are bathed in a suspicious darkness and the sound design does nothing to get us involved. 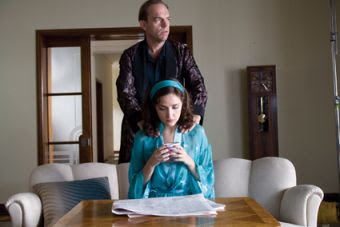 Even Ogilvie’s weird insertion of archive footage doesn’t register much more than a raised eyebrow. So unassumingly average was The Tender Hook that, in fact, the only aspect of the film that I had a strong reaction to was, of all things, the title design. For some reason the filmmakers decided to use some ungodly ugly default Windows font for the credits and any on-screen notes ("Sydney – The Jazz Age" for example). I was utterly perplexed as to why they’d use it. Times New Roman would have been a more apt font to use for such a thing.

So, really, it’s all just a big beige. As I said at the start, writing anything about this film is just so hard because there is nothing at all that jumps out as being particularly noteworthy. As you’ve noticed this review is merely a laundry list of what a review "should" include. Plot? Check. The actors? Check. Technical aspects? Check. I didn’t care for it, but it’s not like I really regretted seeing it (perhaps if I had of paid for it then I would have), I just picked myself up and moved right along. C / Whatever